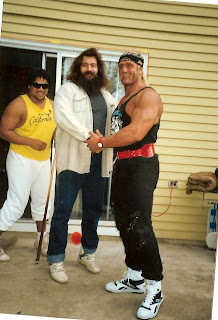 Well WWE creative strikes again first they let Trevor Murdoch go and now they let Stevie Richards go. How in the world can someone stand up proudly and say there is no room in our company for people like these two men. I have always been a fan of Stevie Richards. I ran into him one day at a gym and introduced myself. He let me know that he already knew me as “The Big Cheese” Sal Corrente. I asked him how he knew me and he said that we used to be on shows together. I guess this age old veteran didn’t remember the young up and comer. I told my old Rat Patrol partner “Carolinas Own” David Isley about it and he didn’t seem to remember either.

I may not have remembered Stevie from the old days but these days he is very much on my mind when I think of guys with nothing but TALENT. This guy needs WWE creative to entertain like most people need a third arm and with a sixth finger on all three of them. I would be embarrassed to let guys like Stevie and Trevor go. I hope that TNA has the sense to take both of these guys I realize that TNA can’t take everyone that WWE is to incompetent to continue to employ and they shouldn’t. With that being said they should certainly take these two guys and let them entertain people. Isn’t it time for a Blue World Order Reunion to take place. I think a great place for it would be in Orlando, doesn’t that sound reasonable? Well we can all wait to see how it all plays out. I will wait to see the next brilliant move by WWE creative. Hurry up guys I’m always anxious to discover a new way to do something wrong.

I cannot understand how guys like Trevor and Stevie can be let go and the word is on the street that Gail Kim is headed back to WWE. The WWE needs another diva like they need a hole in the head. I realize Gail can work a little but as far as the WWE diva division is concerned that’s like throwing a bucket of water on a forest fire.

A few months back I wrote about a guy named Matt Holder who runs show in North Carolina. I wrote how he improperly advertised my friend Jimmy Hart and Stan Lane. There were some in the business who came to the defense of Matt Holder although I knew he had been involved in questionable things all along. I realize my word was questioned but I stood behind my opinions and my friends Jimmy and Stan. Well now I hear rumblings that there more situations with Matt Holder in question. It is a shame that people like Matt Holder are allowed so many opportunities to take advantage of good people. At this point caveat emptor applies “Let the buyer beware”.

I was working a show one night in Brooklyn or Staten Island it was a WWF event and Pedro Morales was the agent that night. I was given a match to referee between my good buddy Sylvester Ritter (The Junkyard Dog and Hercules Hernandez. The finish was a roll up where Hernandez pulled the tights on JYD. I was somewhat new in the business and I was not an “in charge” as I am now in the ring. These guys got to close to the ropes and were actually “out of the ring”. Well I positioned myself as best I could to make sure it wasn’t obvious that I knew they were under the ropes. I knew it was a bad deal but that was the finish that was laid out and I didn’t want to stop the finish. The guys could have easily I told me to stop counting I was right on top of them. Well when we got in the back Pedro Morales ripped me a new asshole. I knew Pedro from hanging around and he knew me. I never cared for him very much anyway he has always been a pretty self absorbed guy. He went on and on and on yelling at me in front of everyone. It took JYD finally to stand up for me and say Pete stop yelling at the kid it’s not his fault for him to stop screaming. It showed me what a small man Pedro really was he said nothing to anyone else but he picked me. I was a one hundred and eighty pound referee who was there without The Samoans. It was a rare occurrence for me to be there without those guys. It was a few minutes out of my life but it stayed with me all these years. It’s amazing to me what a small guy a former world champion can be in my eyes.

This photo was taken at Afa "The Wild Samoans" home in Bethlehem, PA. He has recently relocated to the Orlando Fl area and has opened another wrestling school in that area. He will also promote shows there has had his first one coming up in the near future. This photo is of course Hulk Hogan along with independent wrestler and Hillbilly Jim look alike Yukon Jack. In the background is a very young Rikishi. I was asked to post this promo for his first Florida event. There have been many people to come through The Wild Samoan Pro Wrestling Training Center and I am sure there will be many more

This has been a piece of my mind

WXW PRO-WRESTLING TO DEBUT IN FLORIDA

Afa the Wild Samoan will be available for interviews, stories, etc
Posted by "The Big Cheese" Sal Corrente at 10:34 PM