Yes, I'm still alive! Several people have emailed me asking where I've been and what's the status of Cheap Heat Radio so I finally got around to getting a chance to write a column so here's the answer. Well as usual one of the biggest issues has been a crazy work schedule. The other is my wife has been having health problems again and had to have a stent put into her heart and her doctor currently has her on a medical leave from work so things have been kinda busy around the house these days.

The other reason I haven't been doing the radio show is with all that going on I just haven't felt like doing it. In spite of the first show being more or less a 'gripe session' I think the new format with Neil and Izzy has a lot of potential if done correctly, perhaps sometime next month we'll get back on track with doing the radio show. 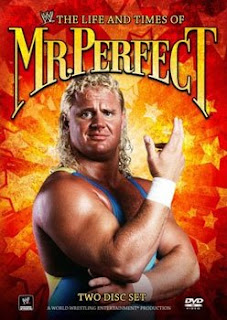 If you haven't done it yet do yourself a favor go out and pick up the new 'Life and times of Mr. Perfect' dvd set that WWE released this Tuesday. As I've said many times before while I don't really follow the current WWE product that closely these days I am a big fan of the WWE 24/7 channel and their dvd releases. This is another in a line of exceptional efforts on their part. I was a fan of Curt Hennig's from his time in the AWA straight through his career and the dvd provides a great documentary on not only his wrestling career but Curt as person with a lot of insight from his father Larry, his good friend Wade Boggs as well as his widow, and his oldest son Joe. Another reason everyone should buy this (especially workers) is a classic 60 minute match between Hennig and Bockwinkel. Awesome psychology and story telling as you really get the feel of a contest, if you watch these guys, there are so many litle subtle things that adds to the realism that you just don't see anymore. His matches with Bret Hart are clinics as well that young guys should study. 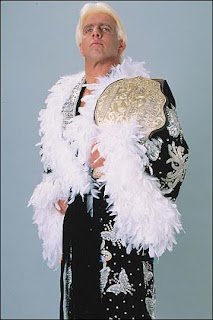 I mentioned WWE 24/7 earlier and this month is 'Forever Flair' month. All kinds of great Ric Flair matches and interviews. I finally saw the uncut version of his Hall of Fame speech, jeez he thanked everybody the Vince down to the janitor. All in all it was enjoyable to watch just a bit long winded. Watching this along with the recent Flair dvd makes it that much sadder when you read things like the story last week about the whole incident with him and his daughter and her boyfriend. Inside the ring the guy is a legend, outside he can't seem to stay out of trouble. I don't know that breaking ties with the WWE was a good thing for him, hopefully he'll get his act together and not let his outside shenanigans overshadow his legendary career, like Jake 'the Snake' Roberts has. I'm not even gonna chime in on that right now, enough has been posted about it all over the internet it's just really sad that one of the greatest minds and talented workers in wrestling's history has now become a laughing stock and an embarassment to the industry. I honestly don't know how the guy is still alive at this point.


Well I've had the opportunity to watch a couple of the new Memphis Wrestling episodes that have been posted. The jury is still out in my opinion. There's been some decent matches shown from the Northeast shows, I like the old matches being shown, I could do without the Wrestling Professor bit but it's not a huge deal. Hopefully once they start showing more current stuff it will be better than the last incarnation. I will continue to watch and see how things go.
Posted by Gene Jackson at 3:40 PM