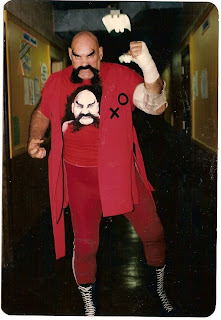 In the grand scheme of things I can’t be sure what happened to Jake Roberts. I can say that this is one time Vince McMahon cannot be criticized. The WWE spent a lot of money on Jake and others that have put through a rehabilitation program. I would say that WWE has done all that it can do for Jake Roberts. The WWE can not want it for Jake more than he wants it for himself.
I actually was one of the first to take a chance with Jake Roberts. As WrestleReunion was getting ready to take place I was contacted by Diamond Dallas Page. When Page called he said that he wanted me to add Jake Roberts to the event. He was going to be sure he was released from jail and wanted him to get the work. I told Page that I couldn’t do it, that I couldn’t take the chance and risk the money. I was then told by Page he would be fully responsible for Jake’s appearance. At that point I was willing to do it I had enlisted Page as host for my event for a reason. I knew that what he says he can do he does. It all went well and I even worked with Jake on occasion after that. It always went well for me and I think Jake and I have a good business relationship. It is my wish that for his sake he can get it together. He has a lot to offer this business still to this day. All the rest of us can do at this point is do what Vince McMahon has to now do, shake our heads throw our hands up and let Jake make it or break it on his own.

I believe any of us in the industry have all heard the same thing for the last few weeks “Hey do you know Ric Flair”? It’s amazing that a guy who has been through the supposed wars that Flair has leaves the business and now has a black eye. Is there a day that goes by that the supposed leaders of our business don’t give it a black eye? I tend to agree with those out there that say Ric should never have walked away from WWE. He craves the spotlight and the fan adoration. It is the one thing that Ric Flair and Corey Maclin (Owner of Memphis Wrestling) have in common. I can’t imagine either one of them sleeping at night unless someone screamed their name when they were pumping gas.

It is a shame that Ric has destroyed another marriage. It would be best if Ric Flair never marries again. I have met his wife Tiffany one time she seemed to be a very nice girl and is gorgeous. If at his age that type of girl isn’t motivation enough to walk the straight and narrow than I don’t think anything will be.
I can honestly say that I wish Ric Flair had not retired. I agree that he didn’t need to continue as a day to day in ring performer. He could and should have put together a new version of The Four Horseman. It is a guy like Flair that should have picked the new group and Flair could have played the part of J.J. Dillon. It would be so much more entertaining listening to Flair cut promo’s each week than watching the garbage that we are currently being fed. I loved working with The Horseman back in the eighties. I worked with the same crew that was on RAW during Ric Flair’s retirement. These guys were just great to be around they deserved all the adulation and respect that they get.

It would have been the best thing for all involved and the fans if Ric would have stayed. I think that one day we may hear of a tragic story involving Ric Flair. I hope that we don’t but understand one thing. This man knows nothing else and never has. He has been in the spotlight all of his adult life each and every day. I know that when Bruno Sammartino retired he really thought that in a short period of time he would be forgotten. He looked forward to a peaceful and quiet life with his family. That isn’t the case for Ric Flair he needs the energy the fans bring. So it really makes you wonder why walk away from the biggest dance floor in our business?

In closing if I was Vince McMahon I would call Paul Heyman and kiss his ass till he agreed to come back and book for the company. Alas, I am afraid that ship has sailed. I can sit here and easily say like so many others I wish that I could go in there and get that ship set on course. It wouldn’t matter if it was me or someone else until Vince bottoms out almost like an alcoholic nothing in that company will change. If there were a true Board of Directors in WWE and not a bunch of marionettes this issue would be addressed quickly. It is all run by a puppeteer who’s skills are fading quickly and whose audience is growing less tolerant at a quicker pace.

I am sure that since TNA started they have wanted to match WWE in the ratings. I just don’t think that Jeff Jarrett and Dixie Carter were counting on so much help from Vince McMahon in reaching their goal.

This photo was taken by me at an Indy show that we used Ox Baker. I had several experiences with Ox. He was always a funny guy and working as a referee with him in the ring was easy. The funniest story I can remember being told about Ox was about him during Escape from New York starring Kurt Russell. The director walked into the makeup trailer and told the makeup person that he loved what they had done with Ox. The director was quickly informed that they hadn’t gotten to Ox yet. I have no way of knowing if the story is true or not but it’s funny because you can sure believe that it actually happened that way.

This has been a piece of my mind
Posted by "The Big Cheese" Sal Corrente at 11:31 AM