275 in attendance...This building wasn't the same building that MSWA was in. It was a newer building...Everyone seems to like working these shows, I guess because of the large crowds...April 4th, they go back to Hohenwald at the Lewis County High School. Probably the same crew.

----275 is not as much as some of the other towns have being drawing, but that is probably one of the biggest crowds every in over 10 years to see wrestling there. I worked for MSWA in that town and I don't think we ever had anywhere close to 200... The photo below is from a show in Gibson, TN with Kevin White being helped out of the ring by "Total Kaos" [Viper [Christian Jacobs]/Kade]. I believe that was in during 2000 or 2001. The other photo is just of "Showstopper" Kevin White. The same for the result I posted below it, which was a match in Dresden March 3, 2001 [I believe it was then - someone help me with that date!!] 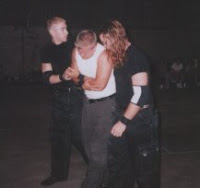 Big Main Event saw a "Loser Leaves Town" Match when Coach BT brought his Kaos Squad ('Precious' Paul Justice & Viper" to face the unlikely team of 'Showstopper' Kevin White & 'The Real Australian' Miles Long! Fans, this was one of the best wrestling matches we've seen in some time, and as hard hitting as you'll see anywhere. Miles & Kevin would prove to be the biggest force as they won the match & sent Coach BT & crew packing!
Posted by Brian Tramel at 10:45 AM