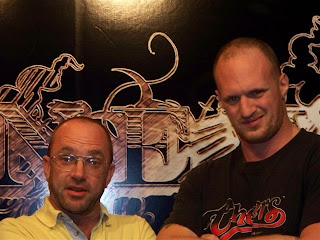 This time around I am here to talk about my friend, Kid Nikels - one of the first graduates of the “Nightmare” Ken Wayne School of Professional Wrestling and one of the stars of New Experience Wrestling. I actually had the honor and privilege of refereeing Kid’s first professional match, which was, ironically, vs Eric Wayne. [ I talked about him last time] I can honestly tell you that in 30 plus years in the business, I have never seen anybody come so far so fast as Kid Nikels.

When I first met him, he had a white boy afro. He was tall and gangly and was definitely tentative in the ring. Fast forward to 2008 - when N.E.W. first began and I was honored to be brought in as the senior official and one of the first bouts on the card was Kid Nikels. This was a new and improved version of 2008(AND '09). He was still tall(duh),but now bald like a N.E.W. version of “Stone Cold” – he was a lot more muscular and less gangly! Oh, but to me, the biggest and most impressive change was the confidence and ring presence that had came to the kid. He actually seems like a 10 or more year veteran now. He is very comfortable and at home in the ring and I’ve never seen him blow up either.

I would have to say that years ago, when I was managing in different territories all over the country - Kid would have been a top attraction in any or every one of them. I could picture him main eventing against Rufus or Pork Chop in Kansas City, Lawler or Dundee in Memphis, Dusty or Jack Brisco in Tampa, the Von Erichs in Dallas, Carlos in Puerto Rico,JYD in Bill Watts’ backyard, Dutch or The Bullet in alabama,etc…and I would have loved to manage him back, as we say, in the day! Well, those main events will never happen, for obvious reasons, but what about Kid Nikels vs Shawn Michaels? Or maybe Kid Nikels vs John Cena? Like Chief Gillespie said in the movie Heat of the Night..."dont you bet against it!"

----“Downtown” Bruno Lauer is a legend in Memphis Wrestling. He surprised everyone last year winning RRO Referee of the Year 2008 from his work at NEW. He appears bi-weekly with his non controversial column. Lauer had his biography published last year “Wrestling with The Truth” and can be purchased at www.crowbarpress.com. Lauer is also currently employed by the WWE.

Photo Credit: Donna Partee - Bruno and Kid
Posted by Brian Tramel at 6:30 AM