A Piece of My Mind by "The Big Cheese" Sal Corrente 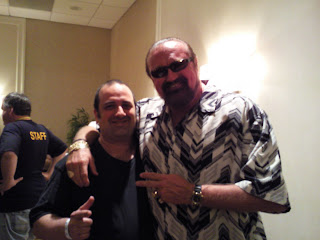 This was an interesting week of reflection for me. It was on June 2nd that two men I knew from early in my career, Classie Freddie Blassie and Sylvester “The Junkyard Dog” Ritter, passed away. In the case of Blassie I got along with him well but we weren’t all that close. He was always funny to be around and we were very cordial. In the case of the JYD we got along real well and did some stuff together. I can remember when Vince McMahon called Afa Anoai for help in locating JYD. I was with Afa as he was calling around until he got the number. When JYD finally got to the WWF we got to know him quickly and real well. At some point he left and moved on and we used him on Indy shows and I took him to Bermuda with us. I remember one time doing a finish with Hercules and JYD and they were tied up in the ropes. I knew it wasn’t looking good but I positioned myself best I could and counted. Well Pedro Morales was the agent that night he really laid into me. It really got stupid after a while then JYD stopped Pedro and said "it wasn’t the kid’s fault it was ours". It was really a coward move on Pedro’s part but that’s the way many people are. I was living in North Carolina when JYD was killed in that car accident. I didn’t attend the wake which was in Wadesboro, NC . I will always remember JYD. I know many of my friends will too. One story stays with me always after The Samoans got done working a program with JYD and Jerry “Mr.Olympia” Stubbs. I was discussing the program with Afa and he told me that I have never heard an ovation like when The Junkyard Dog walks into the Louisiana Superdome.

In the case of Blassie, he was clearly a star. Everything about the way he presented himself was old Hollywood. He didn’t speak much and clearly wasn’t the most trusting guy in the world. He was a great manager and no doubt one of the great all time heels when he wrestled. In those days the greatest manager trio of all time was alive and well in the WWF. It was Capt. Lou Albano, Ernie “The Grand Wizard” Roth and Classie Freddie Blassie. It was priceless just to watch these guys interact among each other. In a bit of irony both of my sisters live only a few miles from where Blassie lived in Hartsdale, NY. I don’t have many great Blassie stories but I did drive him and The Iron Sheik to a show one time in Brooklyn. It was at the height of the Sgt. Slaughter and Iron Sheik feud. It was tough getting those guys in and out of there. They had major, major heat and supposedly weren’t to go on last so we could make a quick escape. But Arnold Skaaland, the agent for the night, put them on last anyway. It was bery tough getting them out of the parking lot but we did it.

It was many years ago that I became friends with a guy that I met indirectly through The Wild Samoans. I was asked to go pick up The Freebirds, who were red hot at the time, at the New Haven Airport. The Freebirds, Michael Hayes and Buddy Roberts, got off the plane with a real big guy. I had no idea who it was but it wasn’t Terry “Bam Bam” Gordy. I had no idea who the other guy was but I took him with us to the arena. He was a great guy and we all got along well. That night I took The Freebirds back to Afa’s house on Shepard Ave in Hamden Ct. We had a big meal and a great time. All of that after I got Michael his tights just before they went on and faced The Moondogs “Rex and Spot” in the final match of the night. The airline had left his bag behind on purpose due to weight issues with the plane. I had to go back to the airport and get the bags. I remember Michael saying that he would go in the ring Bad Street Style (blue jeans). At the time I had never seen that in the WWF before. I remember wondering how Jay Strongbow would have handled that. It was an interesting start for a guy who is still a part of the WWE to this day.

It wasn’t until a short time later that I saw a real familiar face in Madison Square Garden and I yelled out to the guy and he said “Hey man how are you Hillbilly Jim here”. I said "oh ok" and I went along with it. Harley Davidson the wrestler that debuted in New Haven seemed to have become Hillbilly Jim the fan. I was the only non worker who knew him so we got to hang out a little since he couldn’t be around the wrestlers anyway. As with so many instances in this business you meet guys and then you don’t see them for years. It was great seeing Jim again recently. He hadn’t changed not one bit at all. We had a great day and this time will keep in touch. It is great to see a success story from one of the boys. He had a great run and did well with his money. He retired at a young age and now has his radio show on the Sirius network. We hear so many negative stories that it’s nice to know of the successes out there.

This picture is of me and Hillbilly Jim after meeting over twenty years after our first meeting.

This has been a piece of my mind
Posted by "The Big Cheese" Sal Corrente at 10:17 PM