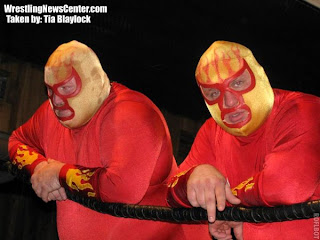 -Chris Rocker/Sgt O’Reilly beat Motley Cruz/C-Money with 187 when Sarge pinned Cruz after a hot tag with a DDT.

----I was told this group is drawing from 60 to 70 a week, which is surprising considering the heat and the roster. The main and semi looked to be good. I have never been a fan of Gunner vs Edwards. LOL And I feel sorry for Bishop. LOL…C-Money was at the Tank Benefit and I assumed he was going to work for NBW, but is here now. He is a good hard worker and will be an asset to this roster. I hate to see him as a heel though, because he got such a huge babyface pop at NBW…They have been running a major angle with Fire/Flame vs GOBs over the DCW Tag Titles with Alan Walker playing heel ref by not seeing the correct finish. I have been getting rave reviews about the matches between these two teams with the returning Fire/Flame team along with Ray/Lee being give the ball to run with.

Photo: Fire and Flame or is it Flame and Fire??
Posted by Brian Tramel at 5:56 AM