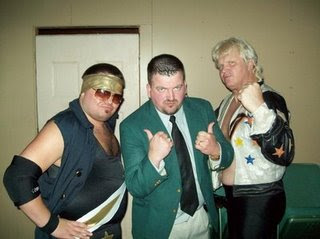 The show this week started with Frank Big Money Martin coming to the ring with Mike Austin and Ron Rage. Martin told the crowd that he promised them great wrestlers in the RWA and keeping his promise Midnight Gold was in the house to deliver the Tag Belts to Money Inc. At this point he started his tv program Money Talks and introduced the fans to Bud Schroupell the host of ESPN Radio 970 “On the Front Row with Budro”. Budro came to the ring but would not get into the ring because of Money Inc being in the ring. Martin asked the guys to go into the back and leave them alone. Bud then got in the ring and Martin explained that the last time Budro was there he had an altercation with a RWA worker and broadcaster Greg Russell. Martin explained to Budro that he did what he had to do and defused the situation by getting Budro out of the building. Martin put Budro over real well and really talked up the radio show. Then told Budro he listens to the show and heard him ask for a match with Greg Russell. Martin said ok if you want a match with Russell you got one. At this point a large masked man came to the ring. This guy was close to 7 foot. Picked up Budro slammed him and dropped several big elbows and then hit Budro a couple times in the head. Budro was out and Martin called out Greg Russell and Russell came to the ring and covered Budro and won the match. Martin then surprised Russell with a small belt similar to the Heavyweight Belt. Martin called him the Broadcasting Champion, then told the crowd when Midnight Gold wins the tag belts then Big Money Inc will have all the gold.

The first match saw the return of Buzzkill of the POB taking on Kid Krazy. Kid can really fly and Buzzkill just took his time and when the time was right and he got his hands of Krazy, Buzzkill used his size and strength to his advantage and took out Krazy to get the win.

Second match was Pokerface and one of the young Allen Bros. This was a good match because they are similar in size and strength. Poker does have the experience on his side. The Allen Bro's are really getting good training in the Dogg Pound. Poker kept on the younger Allen and these two gave the crowd a good wrestling match. Poker face came away with the win but it won't be long before the Allen Bro's are taking home win's and gold.

Next was the match I was really looking forward to. J.D. Kerry and one of the Allen Bros. I was not disappointed either and neither were the fans. Kerry is great and is the future of Professional Wrestling. The Allen Bro's are right behind him and actually was in control and Kerry in a bad way. The Allen's are still making rookie mistakes like arguing with the ref. This time Kerry rolled him up and got the 3 count for the win.

The fourth match was the Big Money match. Mr Hardcore Mike Austin took on Gary Diamond, now these two have had some brutal matches over the past few months, not tonight it’s about wrestling and grabbing the money. These two went after each other from the start and showed the crowd that they both can wrestle. Austin had Big Money there at ring side and seemed to have the match in control but things are not always' what they seem. Gary Diamond has a heart the size of Texas and showed it in this match. There were several times the bag was in the grasp of both Austin and Diamond. Diamond hit his Diamond Cutter and was able to climb the ropes and get the cash. But when he opened the bag it was all fake money. Should have seen this one coming and Martin made a point to tell Diamond. "Did you really think I would put 5 thousand dollars in a bag and give you the chance to win?" " If you did you are as stupid as the fans are and further more if you need the money Diamond you can wash and wax some of my cars!"

The fifth match was kind a strange, it had Rage the RWA Heavyweight Champion being challenged by Logan Fury of the Irish Dragons. Scot Fury was in the corner of Logan and Big Money and Raven was in Rage's corner. Some big right hands were thrown in this match and Scot Fury injected his self into the match on several occasions. Good solid match for Logan and Logan did say when he came out for the match that he was really looking for The Mexican Assassin and the TV belt. Each wrestler hit some good solid moves and they were quite liberal with the fist's and choke holds. The ref really had a hard time keeping it under control and the Dragons did use the 2 on 1 to their advantage and quite often. But the last time back fired and Scot hit Logan and spun him into a loaded arm pad from Rage. Rage got the win and kept his belt and there seems to be some problems with the Dragons.

The Main Event had the RWA Tag Champions The Natural Born Playa'z defending the belts against Midnight Gold. Playa'z had The Southside Brawler and Mr. Pimptacular defending the belts against The Golden Boy Greg Anthony and Beautiful Bobby Eaton. There is no question when you talk about Tag teams and who is the best The Midnight Express with Jim Cornette was one of the greatest of all time. Bobby Eaton was half of the Express and is in fact one of the greatest Tag Team partners of all time. First time I got to see Greg Anthony work and he is also a great worker. Now the Playa'z are no slouches in the ring they have beaten everyone and they both can fight or wrestle. But the advantage goes to the Midnight Gold team because of the greatest young master mind in the business today, Brian Thompson. The Playa'z held their ground and gave the Midnight Gold team a run for their money. In the end Greg Anthony had a chair and hit Southside in the back of the head as Southside had a cover on Eaton. Anthony rolled Eaton over on Southside. The ref was trying to break up the fight on the outside between Thompson and Pimptacular. The ref saw the cover and made the 3 count and we have NEW RWA TAG TEAM CHAMPIONS!! Midnight Gold Martin came out and presented the belts to the team and then asked the Playa'z were is the loyal Rodney Mack? Oh yeah he had a big show to do and left you here alone to lose your belts. I told you I would have all the gold in Money Inc and now I have.

Good crowd on hand 150+ and I have been told that the Midnight Gold team will be a regular group in the RWA which is a great addition to the roster.
Posted by Brian Tramel at 8:06 PM