Dustin Starr vs Austin Lane - Bring On The Hype!! 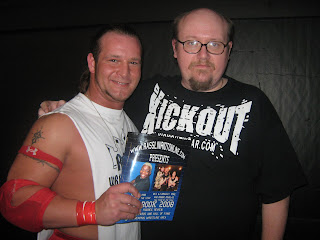 ----Yes, this is one of those matches that will feature two of the RRO's Top Ten ranked guys in this area. A match that I would happily attend if they were not doing it on a Thursday night in Wynne, AR!! I was there for Starr's first bout and I actually think Lane may have been on that show also. These two guys have been accused of having the two biggest egos in this area. Ask Austin Lane about who has the best bouts week after week in this area and he will tell you - Austin Lane. Ask Dustin Starr who has the best matches, best promos and has the the best look and he will tell you - Dustin Starr. Dustin Starr did a great promo on his blog and then Lane sent along the below as a response. Yes, folks this is how you WORK a bout!! If this is taped, I want a copy of it. CLICK HERE to read Starr's comments about Lane and then below Lane responds.

I read Dustin's blog about me and decided to reply. I won't be an idiot. I respect and know that Dustin Starr is a heck of a performer. He always has been. But for years he seems to have blindfolds on and can't see what the rest of the world has grown to know. Austin Lane is as good as the praise he gets. There is a reason that everytime I step into a ring it is a Match Of The Year candidate. There is a reason I am always at the top of the list of best workers in the area. Just like there is a reason that Dustin Starr is always on that list. I proved my worth to Derrick King this year, it is time once again. It is time for Dustin Starr to put up.....or shut up! Dustin, this Thursday night in Wynne, AR, I will find out why they call you FIVE STARR. But you will learn when it comes to Austin Lane.... BELIEVE THE HYPE!
Posted by Brian Tramel at 2:53 PM