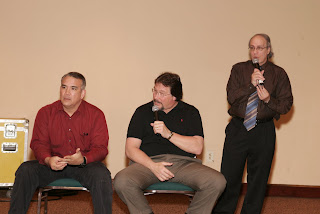 With all the injuries affecting WWE and the potential for others always being there, they need a depth chart that goes more deep than wide. I felt bad when I heard about Edge blowing his Achilles tendon. He is really a class act. If you are the WWE office staff you have to be constantly thinking about the rash of injuries lately. How far away from real catastrophe are they? The injuries come so suddenly and without warning, along with any aging talent pool of superstars. That combined with the fact that most of the top level guys don’t appear to have any long term financial concerns. It’s a clear signal that something has to change and new true main event PPV leader type talent has to be developed.

It did my heart good to see how well Ted DiBiase did as the guest host of Raw this past week. When you see promos cut like that it makes you long for days gone by. If you get the right people, performers at heart loaded with charisma they can still connect with the audience.

I wonder who decided to go in a different direction with Mark Henry? I am not sure why, but I have always liked Mark Henry. I believe that the people can get behind him if booked properly.

These days I fly about 75,000 miles a year if not more, but there was a time when I took my very first flight. I remember being at Kennedy airport really having no clue what was going on. I got on the plane and went back to the coach section. We were on our way to the city of Dohah in Qatar for a week long tour then on to Dubai in the United Arab Emirates. One of the guys on the tour with us was the “Unpredictable” Johnny Rodz. I had never really seen Johnny do anything other than jobs for guys on television and work underneath matches on house shows. I was very lucky that before we took off I was brought up to first class. In those days these kinds of changes could be easily made. I didn’t know how lucky I was at the time but I do now.

The one thing I remember about the tour that puzzled me at the time was that Johnny Rodz got a huge reaction from the people. He got a big reaction when announced and during the matches as well. We used him in a program over there with Prof. Tanaka. When it was all said and done Prof. Tanaka had been a major star for years and years. When it came to Johnny Rodz I would be surprised if any of those people in Dohah had ever seen Johnny win a match. I got my first taste of the TV star facet of wrestling versus a win/loss record type of reaction.

I questioned Charley Fulton about it saying “Charley why are the people so behind Johnny when he loses matches on TV all the time?" His position was that even though he rarely won a match he never let anyone push him around. He always held his own in matches the people here respect that. It was a totally different thing for me.
In the early days of my career I came very close to missing some finishes as a referee. I was supposed to stop Tanaka from throwing the salt at Johnny over there. I almost missed it but it worked out ok.

While Jimmy Hart was in Chicago for the Hulk Hogan Fan Appreciation Day he appeared on the Mancow Show with the lead singer of REO Speedwagon Kevin Cronin. It was a great experience for Jimmy since Kevin was a big Jimmy Hart and Gentry’s fan. He played Keep on Dancin on the guitar while Jimmy and Kevin sang. Jimmy also appeared on the sports segments of the WGN news on Friday morning to promote the Hulk Hogan event. Of course Jimmy is always a WWE ambassador at heart and made sure to plug the WWE NIGHT OF CHAMPIONS PPV. All of that took place after he started the morning on Q101. It was a busy morning for the hardest working man in wrestling.

This picture is from a QA session on the first night of WrestleReunion. In the photo from left to right is Ricky “The Dragon” Steamboat, “The Million Dollar Man” Ted Dibiase and WrestleReunion host Bill Apter.

This has been a piece of my mind
Posted by "The Big Cheese" Sal Corrente at 8:48 PM