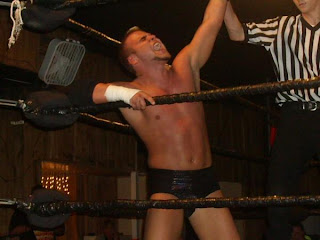 Friday Night Aug.21 2009 At DcW in Dyersburg Tenn..
Crowd was better than we all expected with around 74 Tickets sold and roughly 93 in building...But they were loud at times...

Opening match Weezy vs Jonathan Storm...Match was decent with not alot of physcology but entertaining..with weezy getting the win...

Next came a interview with DK and he was thanking the crowd for coming out and just as Ric Marks asked him about Flash,Bobby Eatons music hit and out came Brian Thompson and he carried on about how DK held him back and that he was now aligned with Bobby Eaton and Golden Boy,Dk could hold him back and that tonight Bobby was going to take care of DK..good crowd reaction they were yelling superkick and it was a great setup to the match...

3rd Match “The Good Ol Boys” [Gaylon Ray/Shannon Lee] come to the ring and they are talking about the different challenges that have came there way and because of the fans they are still the champs..well out comes Dell Tucker..He tells them that he knows they are the champs but since he has been in DcW he has not gotten the chance to really prove himself and asked the Good ol Boys that if he got a partner could he get a title match and they agreed and he brought out his partner none other than Rockin Randy..and the match started the match was back and forth with Tucker not taking any double team moves when tagged in just playing the whole babyface gimmick perfect...the end was Tucker getting the Belt from announcers stand and nailing Gaylon and Randy getting the pin 123 new tag champs...But it wasn't over the new champs decided to beat the former champs up and busting them open making a statement until Rhythm and Blues hit the ring to make the save...and they got the biggest pop of
the night..

4th match was for the number one contenders to the tag titles
with Tim Edwards and Gunner Thompson  facing the returning “Picture Perfect” [Jon Michael/Christian Jacobs] and when they came out the crowd went nuts..the match wasnt that great but tim and picture perfect tried there best but it was ok with the end Picture Perfect getting the 123 on gunner and then after the match tim was getting on gunner for losing the match.

6th match Beautiful Bobby Eaton vs Derrick King
great psychology and just a great match.The ending saw Dk superkick Bobby and go for the pin and just as the ref was to slapping the mat for the 3 count Flash hit the ring out of nowhere and blasted DK and they continued to beat down DK until Stan Lee hit the ring and it looked as though he was cleaning house but got low blowed by Flash and then Bobby and Flash left the ring and Stan got on the mic and challenged either Bobby or Flash to a match next week....

Main Event DcW heavyweight title match
the “Canadian Dragon” Cody Melton  vs The Fabulous Chris Rocker
Cody not liked at all and the crowd was into this match even though it was almost 11pm  but noone left the show..Cody worked the chain gimmick and taunted the crowd with the finish being rocker got the chain the ref stopped him from using the chain on Cody and Cody getting a second chain and nailing Rocker for the 123 and the we have a new champ

----I was told by several people that Flash Flanagan was in worse shape than expected by the attack from the fan a few weeks back. Apparently he had his jaw wired shut. Something can be said about all this with a lesson learned. Flanagan is one of the true professionals in this area. If you can't learn something from working with him or around him, then you are not trying to learn. Security should have their ass whipped one my one letting this happen. But, also do you think some of the old timers would have done a SHOOT angle without telling others it was a SHOOT??
Posted by Brian Tramel at 7:42 AM