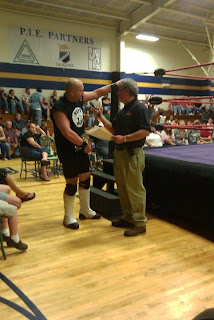 Show started with West principal Ricky Catlett welcoming everyone to the show. He then brought out tonight’s guest announcer Ron Lowery. Lowery did the announcing for the Jackson area back when they had Memphis Wrestling at the Armory in the 70’s. He also used to help host a wrestling recap show with Dundee on WBBJ back in the 90’s.

Before the 3rd match Greg Anthony comes out on the mic and says he’s heard 2 teachers have been bickering the past couple of weeks and that he wanted to settle their differences tonight. He called both teachers (Coach Morris and Mr. Wallace) to the ring. TGB told them that with all the matches that were scheduled for the night that they would have to settle their score some other way than wrestling. TGB offers up and arm wrestling match and both teachers agree. The teachers start of dead even. After a few moments Coach Morris starts to pull out the lead. Just as Morris is about to win TGB throws water in his face and costs him the contest. TGB and Mr. Wallace laugh as they leave the ring. TGB grabs the mic and taunts Morris some more before leaving, but just as he turns around his opponent for the night (Cody Melton) decks him and throws him back in the ring. The match went back and forth for a while and just as TGB looked like he was going to win, Coach Morris came back to ring side and threw water in The Golden Boy’s face, allowing Cody to score the win.

After Intermission a video played featuring Maxx Corbin’s career from a kid to training to now. At the end of the video he showed a picture of his grandfather and said he passed away in 95 and that tonight he would try to do his grandpa proud and become a champion.

Maxx took control early but lost the advantage after an eye poke by CJ. CJ resorted to dirty tactics such as choking Maxx and taunting the crowd. When Maxx finally regained the advantage he was nailed with a spear. CJ went for the cover but Maxx Kicked out at 2 and ½. An irate CJ pushes the ref out of the way and sets up for a 2nd spear. Maxx turns and sidesteps CJ sending him into the turnbuckle. CJ turns back around right into the Black Hole Slam for the 1,2,3.

Derrick King VS The Spellbinder

The end of this match saw the Spellbinder accidentally bump the ref. DK uses a foreign object on Spellbinder and makes the caver, but there is no ref. While DK goes to revive the ref Spellbinder pulls a cane out of thin air….literally. DK turns around to see a very angry Spellbinder with a weapon of his own. Spellbinder nails DK with the cane and gets the win. (Side note: the magic cane was very impressive. The crowd seemed amazed as it seemed to just appear.)

(During a pep rally earlier in the day, Heximer said he was going to show Mr. Catlett the right way to run a school by running him out of town and taking over as principal. Catlett revealed his tag partner for the night (Brian Christopher). Christopher tell all the students that he has been working with Catlett and that tonight the principal will bust heads with his new signature move the DDT)

During the match the crowd was chanting DDT really loud. Catlett (who was actually a former all American Football player) is challenged by Kevin to a blocking drill, which saw Catlett get the better of the exchange. The finish saw Mr. Heximer end up in the ring together alone. Heximer turns and gets caught with a sick DDT. Principal Catlett pins Mr. Heximer for the win.