----Tommy Mercer joined us this week via e-mail for Wednesday Conversation.

----For a guy that has only been the business for two years, he really has a lot of smart things to say that many guys starting out should listen to or even guys that have been in the business for a long time.  Great interview - Thanks to Tommy!!

Give the readers of RRO a quick background. What did you do before wrestling? Who trained and how long you been in the business? 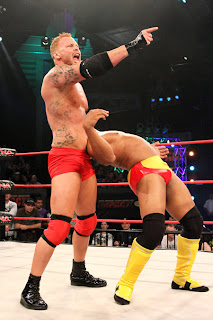 If anyone has been paying attention it's no secret before I started wrestling I was in the Army for 5 years with the 101st Airborne Division with 2 tours in Iraq. I've been a pro wrestling fan my whole life but during my last tour in Iraq I decided it was what I wanted to do. Jeff "Crippler" Daniels originally trained me. I have had the opportunity to travel with and learn a lot from Jerry Lynn, Chase Stevens, and many others.

-We reported recently about your appearance at TNA. Tell the readers how did that work for you?? What is the TNA office saying about your future with them?

Yeah I spent 4 days down in Orlando with TNA. AWESOME AWESOME AWESOME time! Wrestled the X Division Champ Jay Lethal in a dark match. It couldn't have gone any better than it did. Got a lot of great feedback and things are looking positive. There's nothing else I want more in life so hopefully it all works out soon. Also while on that topic there are a lot of people on the internet who think they are a lot smarter than they really are. I've heard about the comments that the only reason that WWE and TNA even looked at me was the way I look. Nothing else. Listen I got into this business with one goal and that's to reach the top as fast as I can, and so far I think I'm on the right track. With that being said I take pride in my appearance. I workout and do cardio because I know for a fact that you aren't taken seriously by either company being overweight and out of shape. (see question about advice to others for more on that) So to whoever said I got a tryout strictly because of my look...you're almost right..and at the same time you're almost stupid..The military instilled great discipline in me and I think that has helped so much with the way things are moving now. I train hard still to this day on top of working 3 to 4 shows a week traveling all over the United States. I practice promos, not on what I want to say but practice emotion in my voice and facials while talking and constantly watch my matches on t.v to critique and fix the small things I see wrong with what I do. So all I am saying is if you don't like me that's fine because I know there is always a critic out there, but I work hard and I dare you to come catch a show I'm on and tell me otherwise, until then don't risk carpal tunnel by typing anymore non-sense. Thats the last I'll speak of that..ever.

-Memphis Wrestling recently closed shop after 15 weeks of shows. Your thoughts?? What was that experience like working for Jerry Lawler??

Well it was good while it lasted. I hadn't wrestled in the Memphis area before that so it was a good experience to get out there and actually get in the ring and work hand in hand with The King. Memphis is a whole different animal when it comes to wrestling. I have adapted my own personal style traveling and doing shows up north where it's more "spotty" in places like Pittsburgh, Philly, Cleveland, Chicago all the way down to Alabama, Georgia, Knoxville, and of course Nashville where it's a little slower and more psychology based than a bunch of highspots. I was able to take my style out there and turn some heads for sure which was cool. Personally it was awesome being affiliated with the nastalgia of Memphis Wrestling and being around such legends and working with and learning from talent such as Jerry Lawler, Brian Christopher, Wolfie-D, Derrick King, Kevin White and more. It's been said that the dircection they were going with me was very unclear. Looking back and watching all of the shows I can see where that came from but at the same time, unfortunatly it didn't last long enough for it to all play out and for us to find out where it was going.

-You have advanced pretty quick in the wrestling business and I see your name on posters all over the US, what advice would you give to someone just starting out??

I have advanced very quickly but I remain level headed (first thing Jeff taught me) and know I still have much to learn and am constantly learning new things on how to better myself everyday. If you want to get into the business first of all I recommend finding a legit person to train you who will take training you seriously instead of taking your money. Nothing in life is free so to get training by someone who actually knows what they're doing is going to cost but it will increase your chances of success. I see too many people out there with trainees that have no business training what so ever. Also if this is something you want to do take pride in yourself and what you want to become. Which means model yourself after the superstars that made you want to do this in the first place. Workout, tan, get gear,(unless your gimmick is to look out of shape, pale, and like you just came straight from your construction working day job which needless to say wont get you many good bookings) LOOK and ACT like a professional wrestler in and out of the ring. Bottom line work hard and take it seriously. Last but most importantly nothing is ever handed to you, If you want something bad enough you have to go out there and get it yourself! If you are looking for training in the Nashville area hit up Chase Stevens @ chasestevens333@yahoo.com or the man who originally trained me Jeff Daniels at jeffdaniels10@ymail.com , who are both accepting trainees now.


-You are getting ready with what looks like a long program with Chase Stevens. How is working with a guy like Stevens, who has been to the "show" and is such a talent??

The ongoing program between me and Chase has been really great. I consider myself pretty lucky to be working with him. He's has years and years of experience and has a lot of knowledge to give. Being as I am still learning it's great to have him around to learn from. Not to mention we seem to feed off of each other and he has been bringing out the best in me in the ring lately and I'd like think I am bringing out the best in him too. He has been to the "show" before and should be there right now. Yet he remains the most positive person in this business I have ever been around. We share the same goals and both refuse to let anyone get in our way. Very very lucky to have Chase around.

-Final Thoughts?
I thank everyone for their help along the way and the support from fans, friends, family, and everyone else. Thank you Brian for the opportunity to answer some questions. Also if you aren't already follow me on twitter http://twitter.com/T_Mercer1 and hit me up on facebook at http://www.facebook.com/MercyKill and on myspace....wait does that still exist?
Posted by Brian Tramel at 6:12 AM