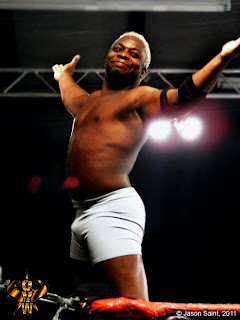 ----Derrick King was a mainstay with Ohio Valley Wrestling in the early 2000s holding the OVW Southern Tag Team Titles several times with his partner Jason Lee as the "Suicide Blondes". At the time this roster included such WWE guys as Shelton Benjamin, Brock Lesner, Nick Dinsmore, Batista, John Cena and many more.  At the time the promotion was a WWE developmental territory.  For those not familiar with the promotion, it is owned by former "Nightmare" partner of Ken Wayne and RRO Memphis Wrestling Hall of Fame Inductee 2010 - Danny Davis and Jim Cornette.   OVW was a WWE developmental territory until February, 2008 when WWE parted ways with him them in favor of starting FCW in Florida.

----OVW held their TV tapings last night.  I am assuming that both Derrick King and RRO Most Improved 2010 Cody Melton was used on the show.  I hope to have more news on who they worked and such in the next few days.  DK had the following to say on his Facebook.

"Tonight I make my return to OVW!! On my way now, it's been awhile since I've made this trip. Should be a fun time can't wait to see some old friends."

"Made it to OVW. Now about to find out what's going on. Strange different time different place but so the same."