----Results from the past few weeks. 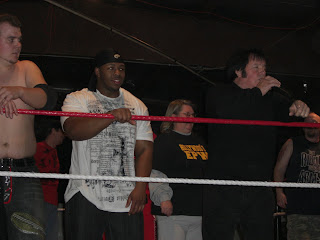 EPW Champion Raja came out of the back and got a standing ovation from the crowd. He then came to the table and handed me a note to read. It said; "I would like to thank all of you for your support. I feel that I need to apologize to each and every one of you, because I feel that I have let you down. Being your heavyweight champion has been my pride and joy. So with that said, please call Edith out here." Edith then came to the table. Raja then pointed to the last part of the note, which I read. It said, "I hope this is not a goodbye, but I know I cannot perform right now, so Edith here is my heavyweight title belt, but it's also my heart. I love you and EPW for LIFE!" Raja then handed the belt over to Edith, relinquishing the title due to his injuries. He then went to the back.

Hollywood Jimmy Blaylock then came to the ring and said that Raja did let the fans down. He took the belt from Edith and announced that there would be a battle royal at the end of the show, and the winner would be EPW Champion.

EPW Promoter Edith Poole came to the ring and called Grady Watson to the ring. Hollywood and the entire Hollywood Clique then entered the ring and ordered Edith to go to the back. Hollywood demanded an apology from Grady Watson for what happened the previous week. Grady refused to apologize. Hollywood and the Clique members then painted Grady's face with clown makeup and started to rough him up. 24/7 ran in to make the save. A furious Watson then said he was bringing in someone the next week who will make them pay.

Hollywood Jimmy Blaylock and the members of the Hollywood Clique ans Smooth, Inc. came to the ring. Hollywood demanded an explanation as to what happened the previous week when Smooth's arm was broken by Bill Dundee. He called Edith Poole to the ring and asked why Dundee was even in EPW, since he had not invited him. Edith said, "Well, I guess he's here because I invited him." Hollywood was angry, and brought out a container full of live crickets. He ordered Edith to eat them. Edith refused. The Clique members ganged up on her and force fed the crickets to her. Out came Bill Dundee and the other wrestlers and the Clique quickly retreated. Hollywood then announced that Josh Matthews would get a shot at the EPW belt later in the night, and that he had a big surprise to go against Bill Dundee later in the show, and brought out Brody Hawk. Hollywood said Dundee must win the match in order to return to EPW the following week, and that he must win with a 5-count instead of a 3-count.

"The Natural" Josh Matthews w/Smooth defeated Chazz Stone to win the EPW Heavyweight Championship due to interference by Neno & Chrome.


The next EPW event is THIS Saturday night at the EPW Arena on Highway 145 in Booneville, MS. Bell time is 8:00 p.m. The card will include Neil "The Real Deal" Taylor vs. Brody Hawk. It will be a wild show, so DO NOT MISS IT! Remember, you never know what will happen at EPW or who will show up!
Credit: "Axeman" Randall Lewis @ www.wrestlingnewscenter.com
Posted by Brian Tramel at 11:52 PM