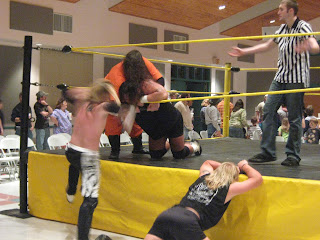 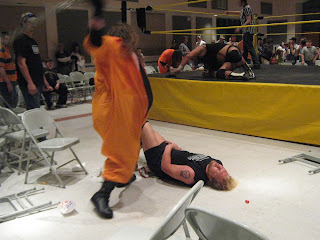 ----Anton LeVeigh beat Paul Riot in the best overall match on the show. It is bad when you get the best match first.  LeVeigh looked good here and continues to improve.  Riot not bad, but real green.  Perfect psychology.   Chop, chop then eye poke – loved that spot for some reason.  LeVeigh with the TKO for the win. [**1/2]
----The Menace beat Chris Lancaster.  Started out good, but Menace lost his air and it fell apart.  Psychology was ok.  Lancaster did a mic spill before the bout and got heat.  Good body on Lancaster, but green.  Menace with powerslam for win. [*]
----Biscuit/Jack Hill/Snuffy  beat Chris Day/Colt/Lord Humongous with Titanic and Big Cherry Colt looked good in this bout.  Worst match I have seen during the whole tour. ‘Nuff said. [DUD]
----Big Indian beat Rik Burton in the best storytelling match of the night. Solid bout as both guys worked hard.  Crowd not into it much due to the match before it.  Perfect psychology building for the finish with Indian pinning Burton out of suplex for the win. [**1/2]
----Nick Mason beat Paul Riot.  Match started really fast and move for move.  Good start then it died with no psychology and both guys just dying. [DUD]
----"Whiskey Hangover" [Ron Horn/Barry Wolf] beat "Asylum" [Psycho/Pappy] and "SouthSide Saints" [Lukas Frost/Cale Conners].  They came out and did a gimmick where they were going to wrestle for the first 10 minutes and if the “Saints” couldn’t pin someone then it would be a brawl.  I like all three of these teams, but I don’t like triple threats with teams.  It turns out into a fustercluck.  Best part for me was the first 10 minutes with Frost bumping all over the place.  All three teams worked hard.  Match went to the floor and all over the place.  Crowd liked it a lot.  Pappy did an elbow drop from the stage onto  that I popped for. Finish had a double pinned which had “Hangover” say "5 more minutes” and “Hangover” won quick over "Saints". [**]
NOTES
----200+ in the crowd and $1,300+ raised for Relay for Life…”LA Husters”, Hardcore Yow and Tia Blaylock from www.wrestlingnewscenter.com was in the crowd…Good to see a guy like LeVeigh, who I used to call a “spot monkey” improve with not only his wrestling, but trying to get in shape to look more like a wrestler…6 man was bad, but if any of them knew just a bit of psychology they could have worked it for a Jack Hill [local cop] hot tag and it would have been good.  Hill left his shirt off and was in the crowd rest of the night.  Horrible!!...Managers should not be bigger than the wrestlers, especially female managers. Just saying…Titanic always gets stuck managing in the worst bout. LOL…Double J, the ring announcer, did a good job putting Yearbook 2010 over.  I actually was tired of hearing about the book and my name by the end of the show. LOL...Ok, so I don’t get it.  Biscuit does look like a wrestler – no body, not a great looking kid, no tan – but gets a huge reaction every time I see him.  If he seriously wanted to be a wrestler, he would work on his body and his moves….As I said, I liked all three teams in the main event, just not my kind of match. My first time to see “Hangover” and “Saints” – both teams are REAL good and know how to get over. ..In hindsight, I would have booked the show [with the same talent] with Lancaster vs Menace, Biscuit/Snuffy vs Humongous/Day – Hill special ref [so he could keep his shirt on], LeVeigh vs Colt, “Asylum” [as babys] vs Riot/Mason [a squash], Burton vs Indian and “Hangover” vs “Saints”…Not sure why they put “Asylum” as heels, because fans did not want to boo them…Thanks to cast and crew.  Fun time was had by all.
Posted by Brian Tramel at 6:03 AM