NEW BOOK from Steve Crawford - Pile Drivers and Power Cords - Stories from Rector, AR and Beyond! 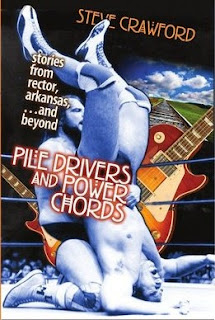 ----My friend Steve Crawford has a new book.
----You may order the book via Amazon.com [CLICK HERE].  I ordered a copy on Friday, so I should have mine sometime later this week and plan on a review next week.  Amazon.com describes it as follows...


This book is comprised of a series of stories, poems, and essays. The four sections, Rememberin', Rasslin', Rockin', and Writin', include entries about growing up and adventures in a small Arkansas town, essays about the Memphis wrestling promotion from the 1970s and 1980s, and pieces on several bands to include Cheap Trick, The Bottle Rockets, the Drive-By Truckers, and They Might Be Giants. This will be the only book published in 2011 to include essays on Creem magazine and Justin Bieber.
----Steve also has a great commercial for it. Check it out!!
Posted by Brian Tramel at 11:38 PM